The Save Our Schools Network strongly condemns yet another case of extrajudicial killings of a lumad educator and IP leaders in Surigao del Sur early morning today.

At 4:00 am today, Alternative Learning Center for Agricultural and Livelihood Development (ALCADEV) executive director Emerito Samarca together with Malahutayong Pakigbisog alang sa Sumusunod (MaPaSu) chair Jionel Campos and his cousin Aurelio Sinzo were gunned down by elements of paramilitary armed group Mahagat/Bagani forces. The said paramilitary group is under the auspices of the 36th Infantry Battalion of the AFP.

‘This is outrageous! Truly, schools under the watch of the Aquino administration have become killing fields for even educators and lumad leaders who have shed sweat and tears in order to set up these schools are now being killed in these very grounds,’ Manano added.

Alternative Learning Center for Agricultural and Livelihood Development or ALCADEV is an alternative learning system especially designed to provide secondary education to indigent indigenous youth – the Manobo, Banwaon, Higanon, Talaandig, and Mamanwa of Surigao del Norte and Sur and Agusan Norte and Sur.

Manano lamented that the ALCADEV have been established by lumads themselves with the help of cause-oriented groups. However, instead of recognizing their valuable contribution, the lumad community school has been subjected to harassment and malicious accusations of the state forces and their rabid paramilitary groups.

SOS Network together with other human rights groups held a candle lighting activity in Quezon City to call for justice for the victims of the recent spate of killings in Mindanao.

Manano urged the government to immediately conduct an investigation and hold the perpetrators accountable. ‘We demand justice for this blatant human right violation! We call on the government to prosecute the killers and disband the paramilitary group Mahagat/Bagani forces,’ he ended. ### 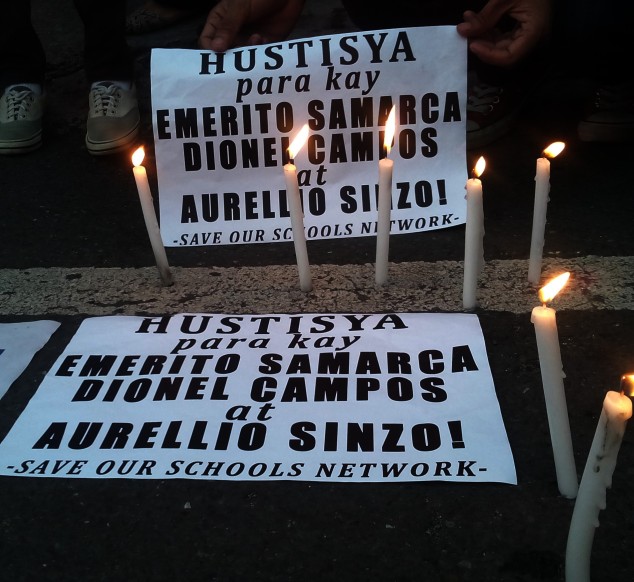